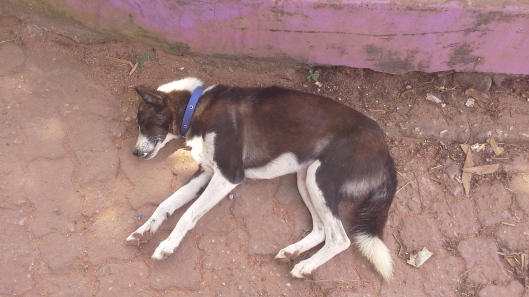 On the beach, after our sun gazing meditation (see previous post) we saw five dogs lying in the sand, they all looked the same.  Maybe they were the litter of puppies we’d seen on the beach in August, all grown up.  I also saw the brown and white beach dog that would have been ‘my’ dog had I not nipped any emotional attachment firmly in the bud.

Tourists do sometimes adopt dogs for their stay, but I couldn’t allow myself to go down that path… falling in love, wanting to ship home, or to start a feeding programme or animal charity…  Not after everything I went through to let go of my cats, my everything.  Link to tear-jerker post here: You can’t take a cat in a backpack around India.  When we were here before (May-August) I occasionally fed dogs something, especially mothers with puppies, but that was it. 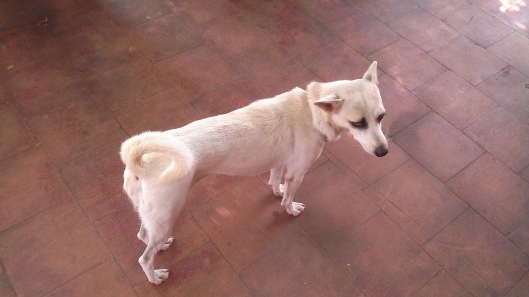 Walking back to our guesthouse along the cliff, I saw ‘the dog with the funny teeth’ (header picture), and ‘the Disney dog’ (pictured above) a white dog with markings that look like it is wearing eye makeup.

Maybe I shouldn’t have been so pleased and surprised to see the same dogs, after all it’s only been three and a half months.

The sea had changed of course, it had turned a deep holiday maker blue but still turned greenish in the late afternoon as it had before.  The beach itself was smooth, no extra channels or walls of cake-like sand, and so wide now that the monsoon season is over.

We went to Aranmula to buy a mirror for my stepdaughter.  These mirrors are special; made not from glass but from a secret alloy of metals, apparently they show you how you really are!  Here is a link to an interesting article about them. 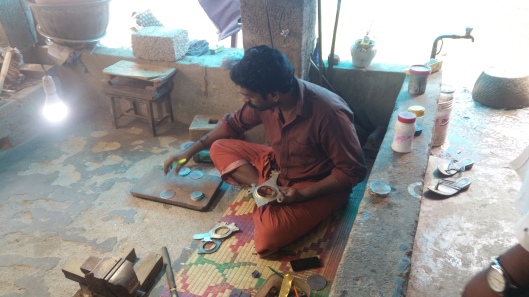 This area was badly affected by the floods of August, they showed us how high up the temple wall the water had been.  Their house had been under water.  Our taxi driver translated.  ‘Where did you go?’  I asked.  ‘To the top of the temple.  We had no food for two days, then the helicopters dropped food.’

Even though this area had been so badly affected just back in August, the mirror shops and workshops were all up and running and open for business.

Sadly, it seems that tourist numbers are down, even in Varkala, where we are, which was unaffected by the floods, with people seemingly cancelling their holidays without checking whether or not there is a problem first.  This is a shame, because Kerala relies on the tourist industry, and needs the income even more after the floods.

It’s been lovely to see Varkala in season time, everywhere spruced up, lit up and busy; although it’s not as busy as we’d expected, when we were here before during the off season there were very few foreign tourists.

Varkala, Kerala, is a perfect introduction to India.  The beaches are beautiful and the dress code is more relaxed; locals are long used to Western tourists and one beach is used mostly by Western tourists and it’s okay to wear a bikini or swimsuit there.  It’s quieter than Goa, not so partyish, with Ayurvedic treatment centres, Yoga schools, families and older tourists as well as younger people.  On the cliff is a tourist strip selling great food, fruit salads, smoothies, vegan, continental and Indian food. 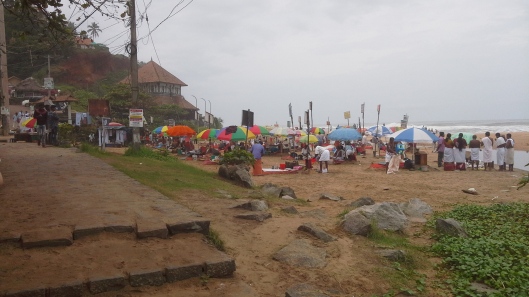 Papanasam beach, ‘The Benares (Varanasi) of the South’ is a ten minute walk from the tourist strip and is mainly frequented by Indian tourists, pilgrims, and holy men and families holding poojas.

Leading away from Papanasam beach is Beach Road, home of authentic local food at a fraction of the prices up on the cliff and various stalls selling bananas and lungis.

The town of Varkala itself (a short auto rickshaw ride away) is not touristy, there are restaurants there with the menu in Malayalam only, and no English spoken.  Fortunately, ‘masala dosa’ and ‘chai’ are universally understood.  Trivandrum/Thiruvananthapuram is an hour away and has an airport and a train station.

Lest this has turned into something of a regular travel blog (I’ve felt sentimental and moved to promote Kerala!), I’ll finsh with a couple of lovely quotes that have inspired me this week:

This from Des from Think Ahead in the comments section of my blog:  ‘Sometimes it’s hard to reconcile with yourself after being provoked.’

And this, which would make the perfect manifesto for this blog, as well as perfectly describing how I choose who to follow, and ultimately aspire to be in the world.  From The High-Heeled Papergirl:  ‘I came to the realization that when you are unconditionally honest, people bond with you, and most of the time they accept you for who you are.’

We leave on Sunday for Hampi, where we will spend the rest of December, and the New Year, before leaving India altogether early January.

*our dear friend Renata, on why she is never ever bored

Thank you very much for reading